While Jim was at the beekeeping course in a nearby town, I spent the day with my niece, Barbara. She'd invited me to teach her how to pressure can the chicken soup she's been making from the Coop to Soup day a couple of weeks ago.

By expressing an interest in pressure canning, she was able to score the 'family' pressure canner that her husband's grandmother had owned, then passed down to his mom. Imagine our surprise when we found the pressure gauge still sealed into its original package! That pressure canner had been sitting in its box for at least thirty years by the looks of the packaging and accompanying booklet, though there was no copyright date anywhere in sight.

I'd taken my camera, intending to write a How To on canning with a pressure canner. Instead, the main focus will be about pressure canners themselves and what to look for if you're thinking of purchasing one.

First, the reasons for owning one. If you would like to can (or, as it's called in Europe, 'bottle') food that is non-acidic in nature, a hot water bath canner is not sufficient. Most of you are familiar with a hot water bath canner. They are thin and are typically made of lightweight black metal with a loose-fitting lid. This type of canner is perfect for processing tomatoes (usually adding a small amount of acid to each jar is a good idea, either vinegar or lemon juice), pretty much any fruit, pickles, fruit juice, jam or jelly. The acid enables these foods to seal safely if immersed under boiling water for a specified period of time, which varies by product and jar size.

I used to borrow my mother-in-law's pressure canner for a few weeks once or twice a year until Jim and I found one at a flea market and picked it up. We've added a second one since then, both the same brand and style, though one is big enough for regular one-quart jars, and the other holds taller two-quart jars. I use my pressure canners mainly for meat-based products such as soups, stews, fish, and chilis; for legumes such as black beans, kidney beans, and garbanzos; and for other garden produce such as carrots or beans. These foods don't contain acid; even the soups that contain tomatoes don't have enough acid to safely can using the hot water bath canner. Enter the pressure canner, which uses pressure to raise the temperature at which the jars seal, increasing the safety margin for home preservation.

A pressure cooker is not the same thing as a pressure canner. Cookers are great for quickly cooking potatoes or for softening tough stewing meat, but the amount of pressure cannot be regulated, so they aren't safe for canning foods for storing in the pantry.

The pressure canner that my niece has inherited looks like this:

It seals with a rubber gasket, and the lid turns and locks into place.

My pressure canners are made by All American and has these features. 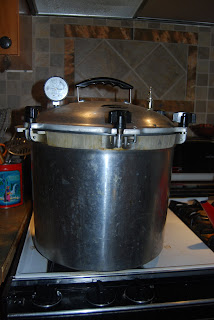 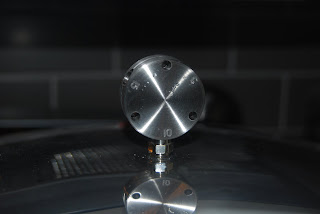 Here's the gauge on the All American pressure canner: 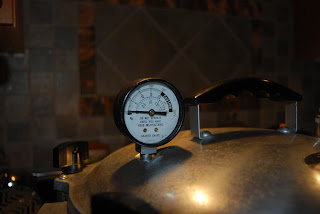 It has a gauge that shows you exactly how much pressure is currently being amassed inside the canner. I got out my canner just for these photos, so the needle is pointing at zero, as it is not under pressure.

The key to pressure canning is to hold the correct pressure for a specified period of time--check your canner's guide for details. On the Wearever, you need to listen to the amount of steam sputtering from the gauge. The directions say that there will be between one and four 'sputters' a minute if the pressure is correct. On the All American, you just look at the gauge and see if the pressure is right or not.

In either case, the temperature on your stove will need to be adjusted, possibly many times, in order to keep the pressure within the correct range for the specified time. Here's where I love my gas range, as the heat change is instantaneous. An electric range's elements take noticeable time to heat and cool, making the fine-tuning of the temperature a much greater hassle. Flat-glass range tops are not recommended for either variety due to the weight of the loaded canner.

Once the time has expired, you turn off the heat and allow the canner to reduce pressure naturally. This can take quite awhile, maybe half an hour. On the All American, I can play with the vent cock a little to allow the steam to dissipate faster. On the Wearever, I popped a fork under the gauge and lifted it ever so slightly to speed the venting. When there is no more pressured steam (and on the All American, the gauge reads zero), you can remove the lid carefully, tilting it away from yourself so you don't get scalded by whatever steam remains. Remove your jars with a lifter, and place them on a padded surface away from any draft until they seal and cool.

The upshot of which style of pressure canner to purchase should you desire one? Truly, I would stay with All American. I like the toggle bolts that hold down my lid (they make me feel secure!), I like that there is no rubber gasket that may fail, and I LOVE the fact that I can read the gauge and see exactly how much pressure has built up.
Posted by Valerie Comer at 2:35 PM

Did you hear the one about the young woman who searched the grocery store shelves high and low for a product called scratch because that's what her grandmother made everything out of?